We got snow again! And this time, the schools ARE closed. It is much more snow and alot colder and icier than on Monday. And if you look closely, you can see the snowflakes falling! 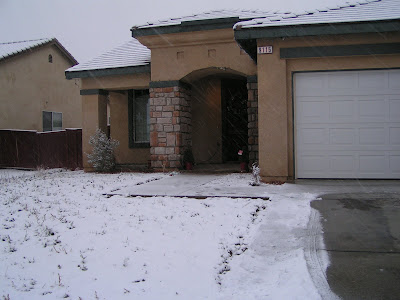 That was the front of our house. Here's our Truck: 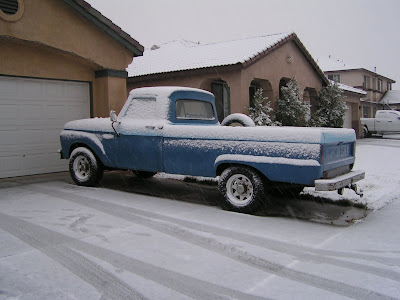 A couple of views down the street either way: 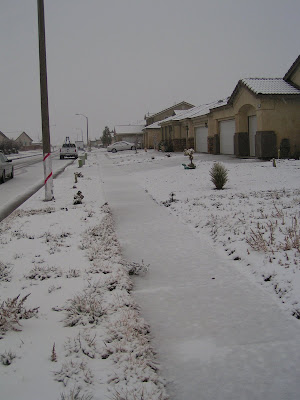 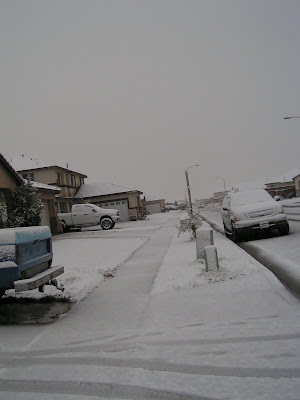 And our back yard: 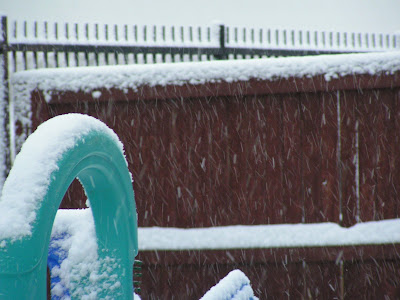 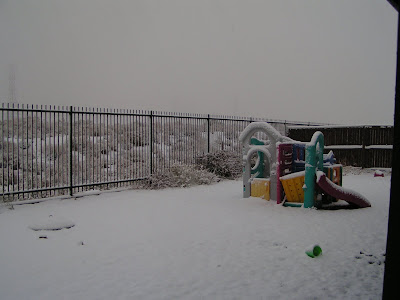 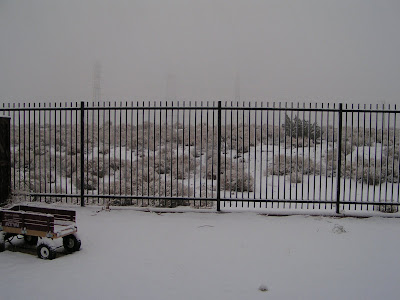 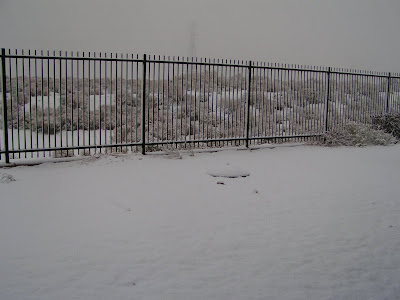 I have to chuckle. Last night we were at Costco and my mom calls. She and my dad stayed “down the hill”** for the night so they would not risk being unable to go to work today because snow was supposed to be down to 1000 feet elevation. We are at about 2200 feet. And their house (13 miles away) is at 24oo feet elevation.

**”Down the Hill” means South of the Cajon Pass of the San Bernardino Mountains into the valleys (Riverside, San Bernardino, LA, Ontario etc). That's where my parents and Xaver work and where I teach 90% of the time too– we have one LSS “up here”, Scrapbook Boulevard, the only LSS between Ontario, CA and Las Vegas, NV!

Anyways, back to my story.

So my mom was all concerned about how Xaver was going to get to work today in case it snowed–usually snow wreaks havoc in the Cajon Pass because the majority of people going through the pass (the best route between LA to Las Vegas) have no clue how to drive in snow. That's why Xaver couldn't go to work Monday–it was all the yahoos who decided to come up here and then they slide off the freeway or flip their car cuz they are trying to go 80 or worse cause a pileup. There was even a guy on the news from Moreno Valley who drove up just to see the snow– hello?! Do you watch the news dude?!

Anyways, I figured it wasn't going to snow–the skies were clear at 8pm for pete's sake! So why worry, right?!

Just another example of why you should listen to your parents. But I didn't have anywhere to send him (to their hotel room- ha!) so we figured we'd figure it out when it happened. So Xaver took my car, the safer and better working car, to work. I may not be going to Pink Pineapple tonight…phooey. And this snow does look like it has more staying power than the snow that melted midday Monday. Yes, it is nothing like back East or the Midwest but in California snow is a major event.

Since I had the camera outside, I took a photo of my front door. 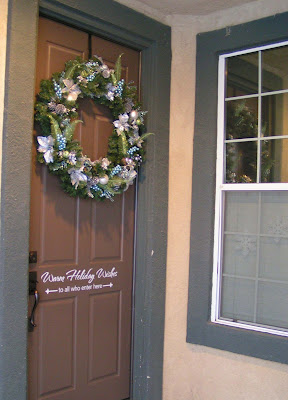 I created the wreath myself! I used to do stuff like that all the time but now I just seem to play with paper all the time. I wanted a really huge wreath for our inexplicably tall front door and even at 50% off at Michael's the wreaths I wanted were $100+. So I figured I'd make a wreath and got the giant wreath base, all the decorations (and I still have a bag of these left over) plus some other goodies for about $40. Yeah, $40!

AND I tried my hand at QK vinyl. I got the new “Holly” Set for my Silhouette and decided my first project would be to cut a 3 foot wide “Deck the Halls” for my house. What a waste! I totally messed it up. And even if it came out right, all the walls in my house are textured so I can't put vinyl on them anyways. Live and learn.

So next I did the litle robot that was on the cover of a book I featured on my blog last week. Something smaller was alot easier as my first item to cut!

Now that I was on a roll, I wanted a sign for my door but I did not have white vinyl. So off to Scrapbook Boulevard to get some white vinyl and voila! 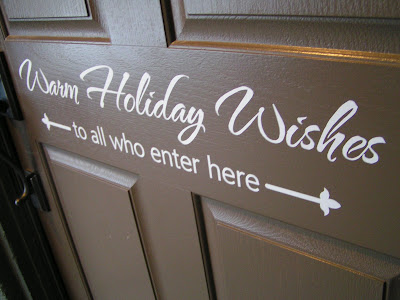 Peeling the excess vinyl was the hardest part and then getting it on the door straight was a challenge. It is actually a bit crooked but I can live with that. I have the best door on the street I think! LOL

Alright, I've got to peel myself from the computer to go work on a few things. Have a great day–and stay warm! LOL I'm sending the kids outside…