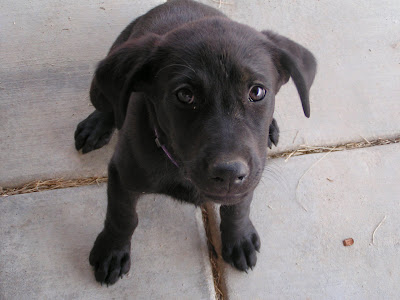 Katie's puppy Olive is really sick. Today we'll be busy taking her to the vet and getting her checked out. Katie is pretty bent up about it.

Olive had to be put down. We took her to the vet, they tested for Parvo, did x-rays and blood work. She had a rare strain of Parvo that didn't show up on the inital tests and was having some internal bleeding and other problems. We elected to have her put down because the Vet said even if we hospitalized her she was pretty far gone and already shaking all over, not eating, or drinking and not walking either. She would have to be hospitalized for at least 3 days ($2400+ due right away which we cannot afford right now) and that she would likely not make it. If I really thought she would have made it I would have figured out how to pay for her care, cash in some bonds, sell off something, borrow … but I just didn't want to take the chance since the Vet said she was in such bad shape and probably would not live anyways. She was really suffering and they said the best thing to do would be to let her go peacefully and not be in pain anymore.

It happened really fast, her getting sick. Katie was pretty bent up about it and me too but we are already looking to get another doggie. Olive did not have her shots yet and this just goes to show how important those vaccinations really are. We have new neighbors with dogs so that is likely how Olive got it since she had been fine previously. Our next dog will be from the pound where they give the shots right away. We will likely wait until winter when the Parvo season is over so the new dog's vaccinations have a chance to take effect. Thank for your prayers. Katie is doing better now; she has had experience with pets dying before and knows that it is better for them not to suffer and knows that Olive has gone on to doggy heaven. We will miss her alot though. She was very sweet and a part of our family.