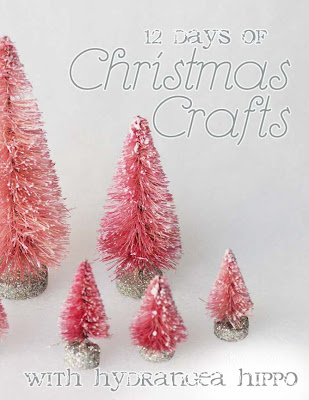 This is Day 3 of the 12 Days of Christmas Crafts here at the Hydrangea Hippo Blog. Today I have a cool craft to share with you, great for making gifts or decorations this year:

Today at Designer Crafts Connection we're hopping with sock monkeys!! When Creativity Knocks has sponsored our hop along with supplies from Fox River, Judikins, and RIT.

We're having a contest too!! To enter the contest go to http://www.whencreativityknocks.com/ website by December 19th
and in the Member Login box click Create An Account and add Entry Code: Sock Monkey.


There is also a discount coupon to purchase the WCK VideoBook: Sock Monkeys Go BanAnas.


I have never ever made a sock monkey before so when I received a pair of Fox River Red Heel socks in the mail, I was a little dumbfounded. There Judikins sock monkey stamp included int he shipment was much more my speed, as a papercrafter! The pack of socks comes with directions to make a sock monkey but I was a little challenged since I have not really sewn anything besides paper in a long long time! Luckily, there was also an instructional DVD or “VideoBook”, Sock Monkeys Go BanAnas, from When Creativity Knocks in the shipment.

The show starts with an interview with an actual sock monkey, conducted by Megan Araujo,one of the founders of When Creativity Knocks. Not only does the show include jokes, facts about the history of sock monkeys, and lots of tips and idea but the instructions are fabulous. I feel like I can make a million sock monkeys with my eyes closed now! The DVD includes a set of patterns for creating the monkey as well, which made the process much easier.


I did great with the directions in front of me, the DVD instructions in my head, and the patterns ready to cut from the DVD. I did make a mistake and cut the body of the monkey in the wrong direction, leaving the sock open at the top. When I finished my monkey, I just tied to top closed with a piece of ribbon — it's a girl monkey! The mouth is a bit crooked as well but I found that the sock was very forgiving and the more mistakes I made, the more whimsical and silly my monkey became. Really, this was much much easier than I thought it would be. 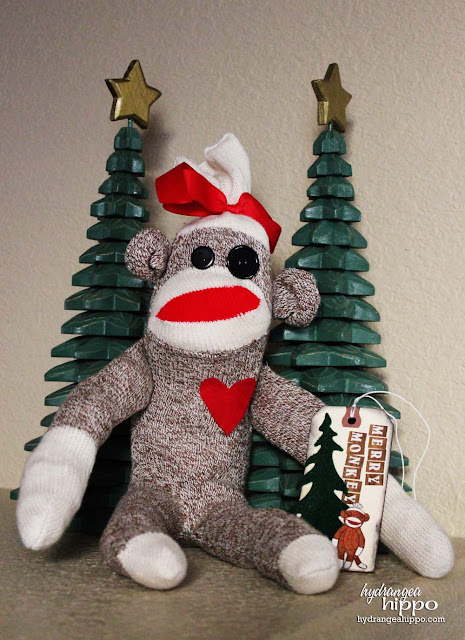 The DVD suggest stuffing the monkey with batting, which I have a huge roll of, but am unable to get to with the construction in my garage. As I was trying to get to the batting I saw a huge bag of plastic grocery bags we've amassed and store in the garage for trash, etc. I  immediately thought of toddler and baby stuffed toys where they have a “crinkley” sounding limb for the kids to touch. Wouldn't that be fun to make the monkey “crinckley”? I stuffed my monkey with plastic grocery sacks, balling them up to help avoid lumps. This was super easy and I used about 15 bags — yay for recycling! My kids thought it was a fun surprise to grab the monkey and hear the crinkling, like Rice Krispies cereal they said. Since, according to Sock Monkeys Go BanAnas, the sock monkey was a Depression era toy, it was fitting to use a cast-off household item like old plastic grocery bags to stuff the monkey. I added a heart cut from wool felt and two button eyes to complete the monkey. 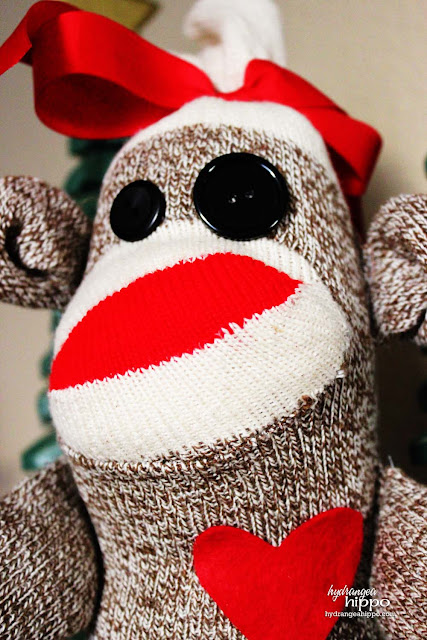 I like the monkey's little smug smile–alot like my niece, a little diva in her own right! She's gonna have some awesome adventures with my niece, two peas in a pod.


Since I plan to give this monkey as a gift to my toddler niece and infant nephew, I created a tag with the Sock Monkey rubber stamp from Judikins. I stamped the monkey image onto pieces of red, cream, and brown patterned paper. I then cut out the parts of the monkey that were supposed to be each color, such as the mouth from the red patterned paper. This is a way to use the stamp as a pattern to create a paper pieced image of the sock monkey. Once all the of the pieces were cut, I adhered them together to form a sock monkey. I diecut a felt tree, stitched it to a shipping tag, and added the monkey and a sentiment. A little spray with Smooch Spritz in Vanilla Shimmer added a little holiday sparkle. Now she's ready to put under the tree. 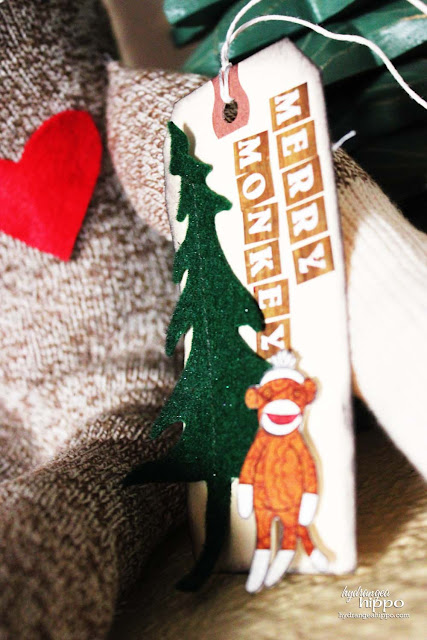 I really had alot of fun making the sock monkey and was surprised how easy it was. This is definitely something the kids and I can do together as an afternoon craft. I know what we'll be doing on Christmas break this year!

Thank you to the sponsors, When Creativity Knocks, Fox River, Judikins, and RIT, for so generously providing the products we used to create the monkeys on this hop–what great fun! To follow along on the Hop, just click “Hop Forward” in the image below. Happy Hopping!