If you've ever purchased and worked with a high quality knife, you know what “sharp” is. Slicing through tomatoes like butter and cutting with little to no effort. That's why chefs and foodies get their knives sharpened regularly. And if you've sliced your finger by accident with said knife, then you know what that feels like – nothing.

Jamie Dougherty and I were involved in a Designer Challenge with Charity Wings in which we were given 8 minutes to create a project with Westcott Scissors, May Arts Ribbon, FloralCraft Foam, DecoArt Paint, Scrapbook Adhesives' Keepsake Pockets, Rowlux Illusion Film, and a few other goodies.

We were rushing and laughing and crafting like mad and I left the scissors sitting OPEN on the table. I rushed to grab them and didn't feel a thing. And then there was blood all over the place. I had sliced my fingers like a tomato! I got some first aid, used some of the bandaids from the first aid pack in my project and Jamie and I tied for first place :) The whole thing happened LIVE online via Charity Wings' livestreaming LIVE from CHA event. We just rolled with it!

Today, this is what my fingers look like: – healing pretty well, except for the ink in the cuts! LOL What can a crafter do? 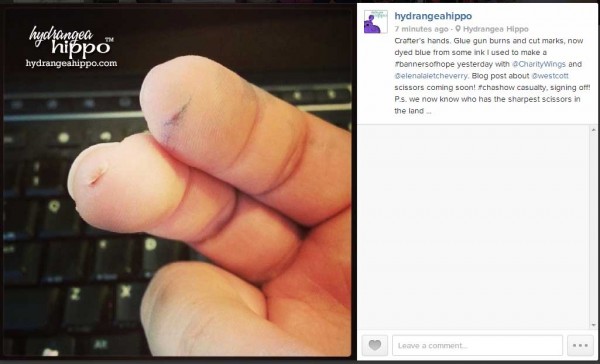 Some people might think this is bad PR for Westcott. I think not. If the person who chopped up their hand with the scissors still thinks Westcott scissors are the bomb, then just agree with her and get some of these fabulouso scissors for yourself! Just focus on cutting the paper or fabric or metal sheets you're working with and steer clear of the hands. I now honor them as “The Sharpest Scissors in the Land”: 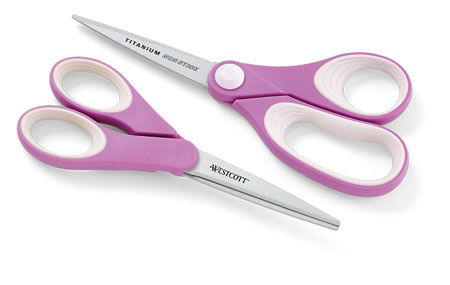 2 thoughts on “How Sharp ARE Westcott’s Scissors? A CHA Story…”