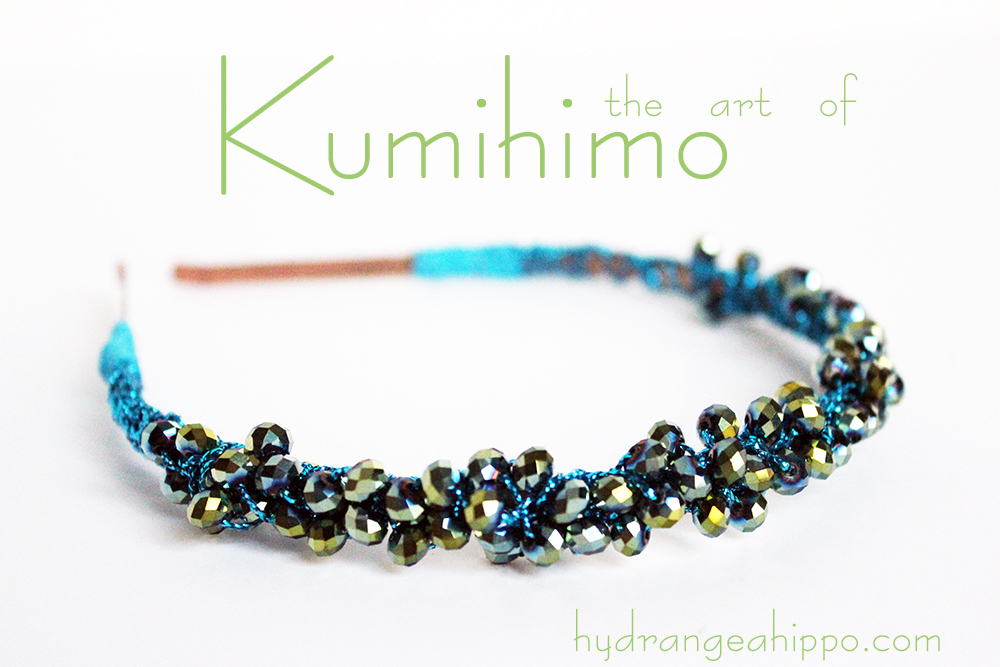 The Prima Bead Blogger Team was challenged to practice the art of Kumihimo, a style of Japanese braiding, this month. I was immediately excited as I had recently seen a beader come into a local Hobby Lobby store with her Kumihimo disk, mid-project, in hand as she looked for more beads to match the project. I had never seen it before! Imagine my excitement when I opened this month's assignment from Prima Bead to see a Kumihimo Disk in the kit! 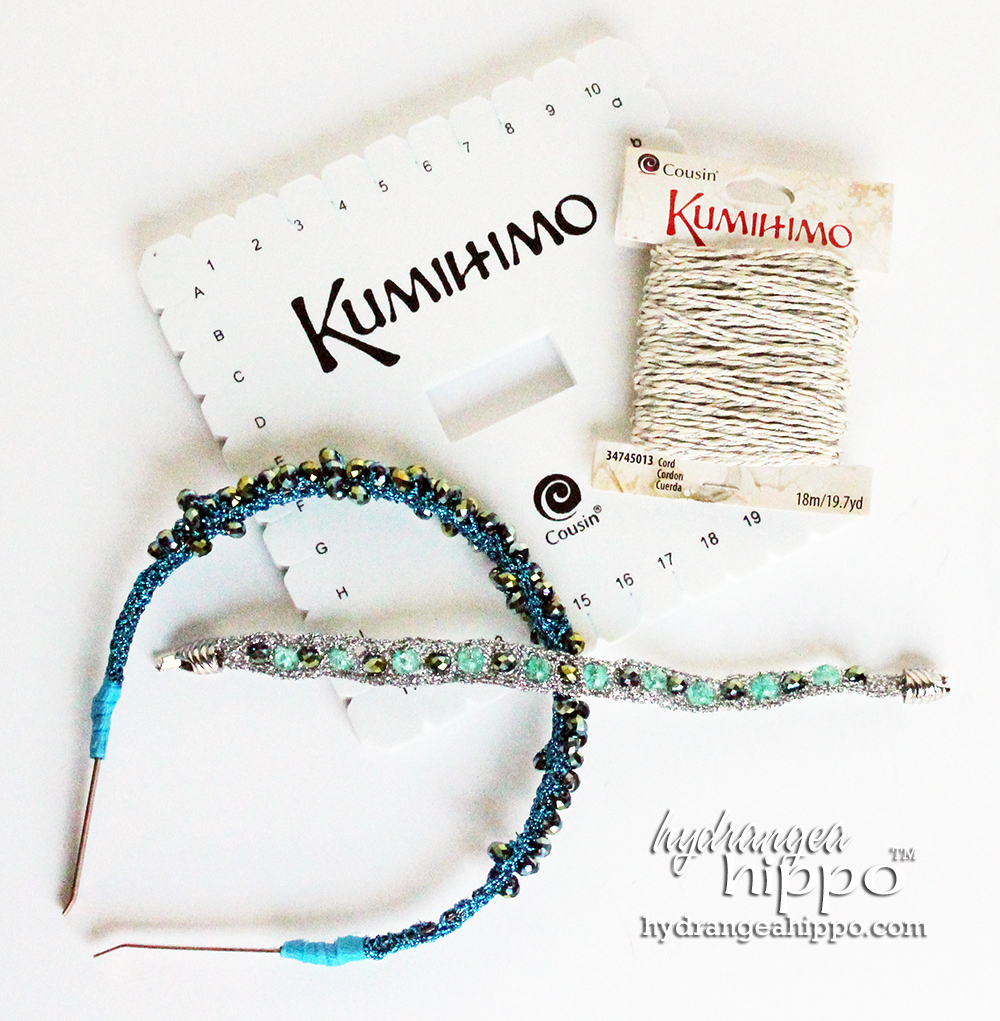 Sure, braiding was fun but I wanted to do a beaded project, inspired by the lady who I had met in Hobby Lobby who was working on a beaded Kumihimo necklace. She had used a Round Disk and I recevied a Square Disk. So the design was going to be different. The Square Disk allows for a flat braid to be created – think friendship bracelets but with alot more possibilities and power. In essence, many of the “braids” done on a Square Kumihimo Disk are weaving that is braided or connected while using the Disk to create a textile, not just a braid. For example, the technique I used for both of my projects produces two separate woven textile strips which are then connected through braiding.

Here's a video from Cousin Corp showing how to make a Round Kumihimo braid:

The Cousin Kumihmo Disks include instructions which were a great help to get started. Most flat braids created with the Square Disk include a non-beaded section so this how I began my first project. I knew I wanted to add beads and I was unsure as to how it would turn out. I remember seeing the lady in Hobby Lobby with beads strung on her cords while they were in the Disk – so I threaded 15 beads on each piece of the 8 warp braid. “Warp” means the number of strands in the braid.

The braid is formed as the threads are moved from on slot of the Kumihimo Disk to another, in a specific order and one thread at a time. After 6 repetitions of the pattern, I started adding beads. The beads I chose were larger than the “stitch” size on the braid – so the  beads did not sit within the braid but rather on the top of bottom of the braid. Beads are added by sliding a bead down the thread towards the braid and then finishing that revolution of the braiding pattern. Beads can be added every revolution of the pattern, every other, or after more iterations depending on the size of the bead and the look you wish to achieve. I knew the results I was getting while braiding were not going to work for a bracelet. Due to the beads being larger than the “stitches” around them, the braid began to warp with the sides curling into to one another to form a tube rather than a flat braid. This can also occur from pulling the outer threads too tight while working the braid.  Normally, this would result in junking the entire project. 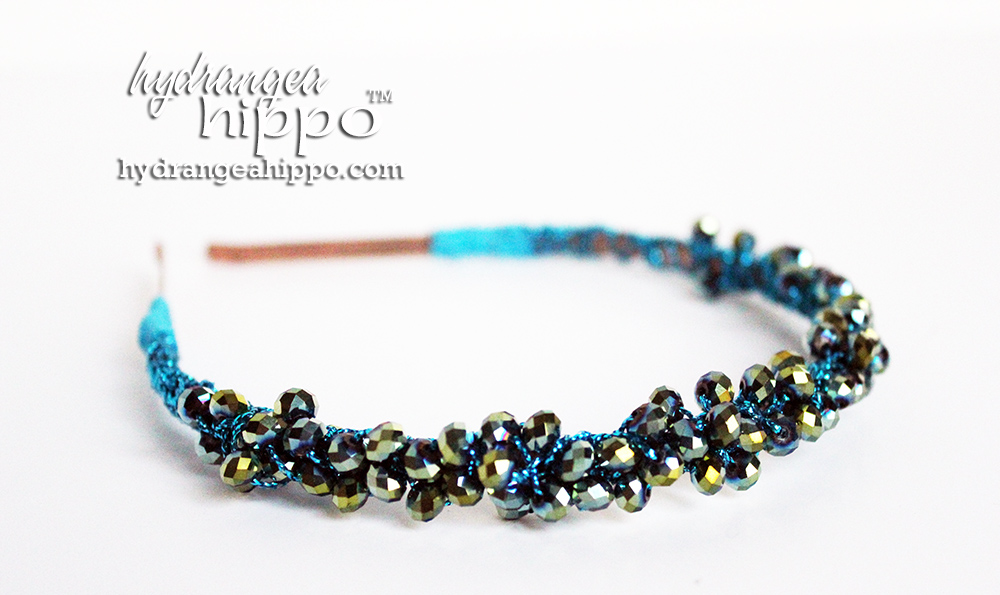 But I kept going. Because as the braid formed, the beads looked like crystals on a stalagtite, forming and growing in this unique organic pattern. I loved it! I took a thin copper head band and wrapped the finished Kumihimo braid around the headband. I then used the same Kumihimo cord to stitch the edges of the braid together around the head band to secure it in place. I wrapped the raw ends of the braid around the headband with a small strip of grosgrain ribbon which I hot glued into place. This head band has a unique, hand-beaded look that took MUCH less time to create via Cousin's Kumihimo Disks than it would have had I hand sewn beads to the headband or to a piece of fabric and then to the headband. 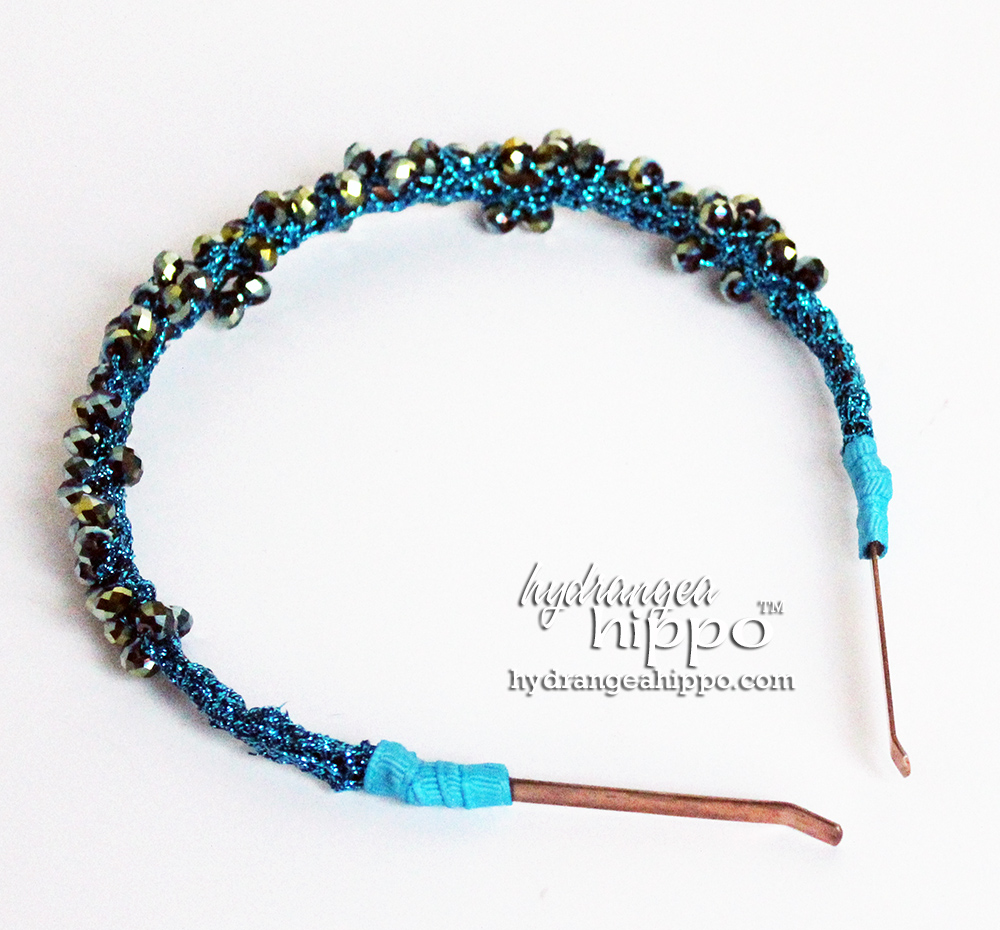 The next project was a bracelet, again using the same style of cord and Square Kumihimo Disk as the headband but to create a bracelet with a deliberate and well-thought out beaded focal. 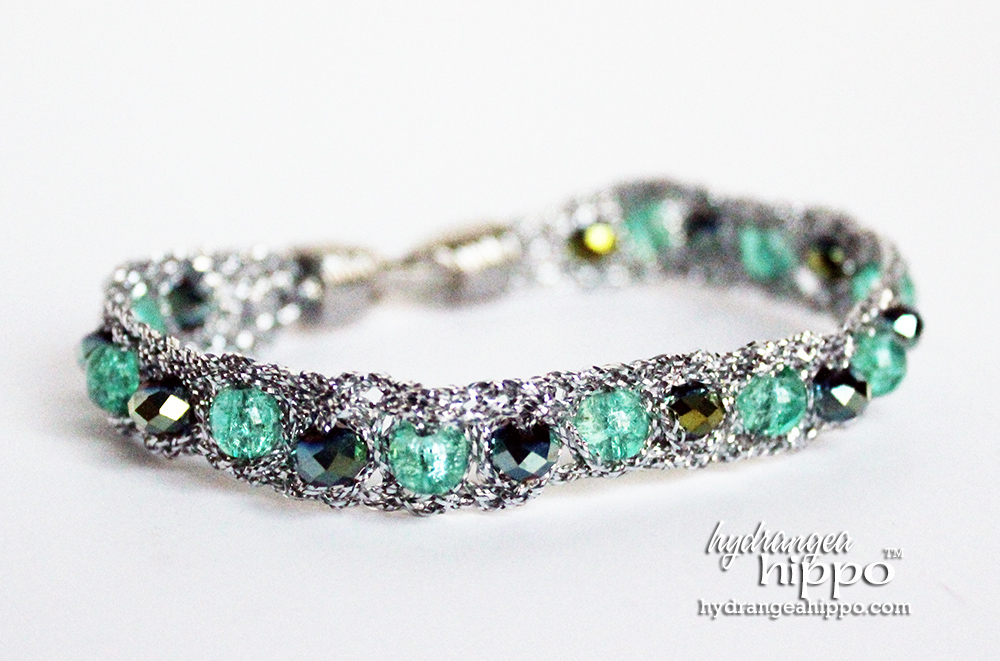 For this bracelet, I used the same technique as I did for the headband and an 8 warp braid but I threaded the beads on one at a time to specific threads while braiding. I also added two revolutions of braiding between each bead to help keep them spaced out and keep the braid flat. 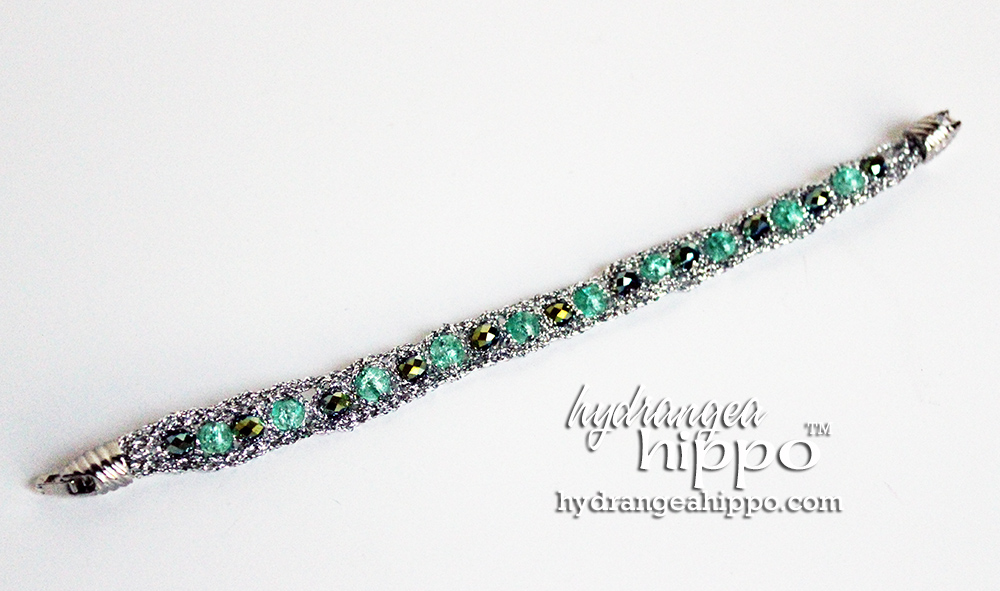 Once the braid was finished, I used E6000 to adhere the ends of the braid into a clasp from the 28pc Metal Findings Mix- Silver Pack: 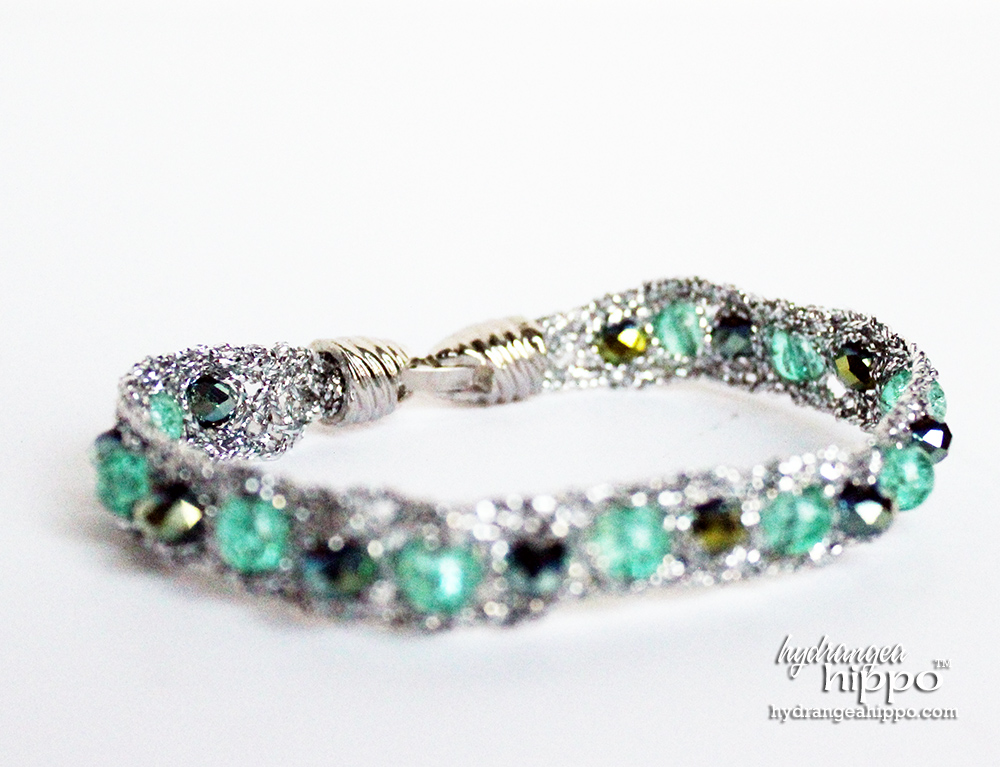 I really love the sparkly effect and how nice the braiding and beading came out. I can imagine creating cuffs and anklets in this same style! This bracelet took about 1.5 hours to complete, while watching television one evening. Once you get started with the braiding, it goes together really quickly and has a therapeutic effect, much like crochet or other repetitive crafts. With practice, the braiding will become more uniform and controlled. 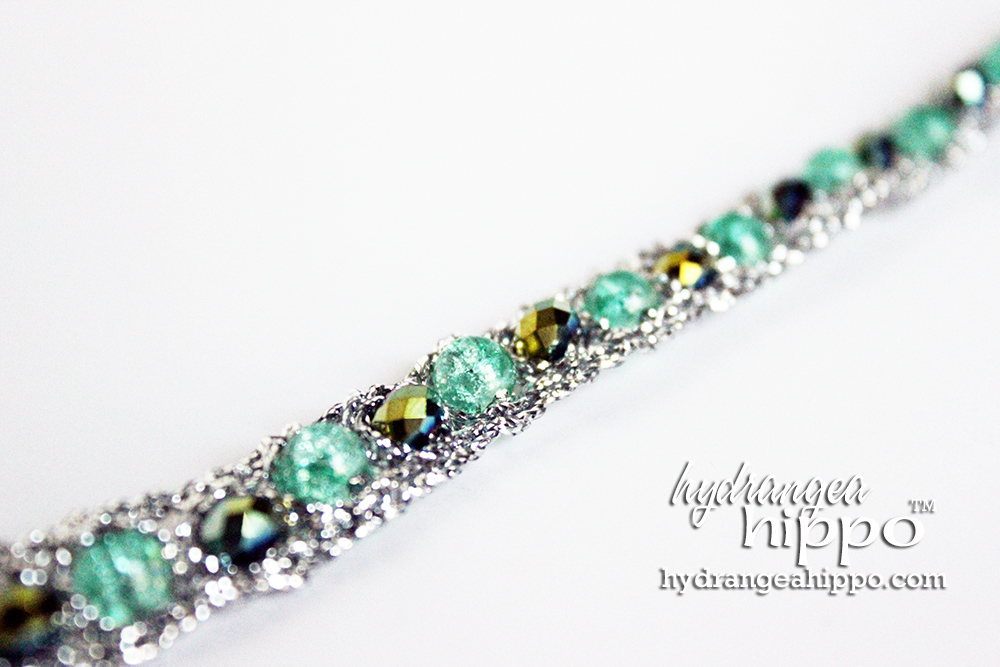 I hope you enjoyed this sneak peek into my initial foray into Kumihimo. I expect to make many more bracelets and projects soon and plan to add the Round Disk to my tool chest.  Do you think Kumihimo is something you could enjoy? What would you make?

10 thoughts on “The Art of Kumihimo”