I recently reconnected with a friend from high school on Facebook and she sent me this email titled “Divorce”. At first my heart sank because I thought she was getting a divorce but then I read the email. Silly me, tricked! LOL So here's a funny little story about the holidays:

A man in calls his son in the day before Christmas and says,'I hate to ruin your day, but I have to tell you that your mother and I are divorcing; forty-five years of misery is enough. ‘Pop, what are you talking about?' the son screams. We can't stand the sight of each other any longer,' the father says. ‘We're sick of each other, and I'm sick of talking about this, so you call your sister in and tell her.

Frantic, the son calls his sister, who explodes on the phone.'Like heck they're getting divorced,' she shouts, ‘I'll take care of this,' She calls immediately, and screams at her father,'You are NOT getting divorced. Don't do a single thing until I get there. I'm calling my brother back, and we'll both be there tomorrow. Until then, don't do a thing, DO YOU HEAR ME?' and hangs up.

The old man hangs up his phone and turns to his wife. ‘Okay,' he says, ‘they're coming for Christmas and paying their own way.'

LOL!! I've seen this one before but it is just so clever I love it. I can see my parents pulling some shenanigan like this! One of my favorite things about the human race is that we can be so clever.

I also wanted to share that Carol Small, the owner of Scrapper's Cafe in Corona, CA has created a version of the snowman I shared a few weeks ago. She loved it so much she asked of she could borrow the idea to teach as a class. She filled the snowman with “snow” to create a really cute centerpiece. The scarf on this snowman is also crocheted!

Want to make one too? She is offering a class this Sunday December 14 from 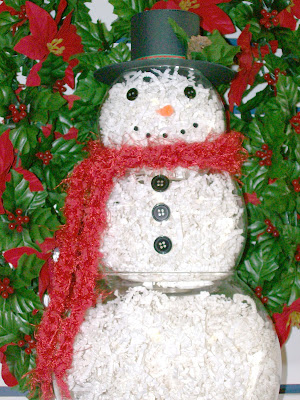 Have a happy day!!

P.S. I got everything on my list done and then some with Xaver's help last night. Woohoo! And I even got started early on setting up for Saturday.

One thought on “Funny Fun Stuff!”