The cropping group I am in, Who Gives A Scrap?, is doing a little challenge to create a layout with 2009 Resolutions. There has been alot of stuff on my mind this year regarding relationships – with friends, with family, with fellow instructors, with store owners, with customers, with teachers, with girl scout leaders and parents, with neighbors, between friends and others I know that don't really even involve me, just where I have seen people hurting…. and I've been thinking about the resulting successes, trials, wounds, and tribulations of these relationships that have all produced opportunities to learn something about myself, the people who are important to me, and the world. And they have also made many of my relationships with the people listed above stronger.

So today's post is a little bit about a recent situation that reminded me of the lessons I learned over this last year. And then about how I am pondering what my resolution should be for 2009. Lose weight, of course, but I want to do something deeper than that, something I might actually succeed at! LOL

I'm always forgetting that more people than just “my friends” read my blog when I share personal stuff. I KNOW more people do, people who like me I hope but I know some people who don't like me read my blog too. It's public and that is how I like it so everyone is welcome.

I guess I gotta remember that when other people DO read it, they might see stuff through their own lens and take things the wrong way. I can't really control all of that since there are limitations to conveying tone when typing and that is something that I totally accept — if someone is having a bad day they can hear “Happy Holidays” and take it the wrong way. Not a whole lot I can do about that. I will remember it when writing my posts, but I just don't know that there is a whole lot I can do about what goes on in someone else's head. In fact, I really have no power in that realm!

I recently learned that several people were offended about something I wrote on my blog a couple months back about me. It really reflected some things that were going on in my life at the time — I'd never blast someone personally on here — and I doubt anyone who reads my blog wants to read that kind of blather anyways! LOL Plus I know better than that–things can be forwarded so easily, why would I want the drama? I like to think I operate in a drama free zone … ;)

As unexpected as it was, I discovered that several people took things that I said to be a personal attack on them. Some of them are people I have barely met and had less than a handful of conversations with. Due to their frustration with my post (this is my theory that they were just frustrated and not being mean) I found out that they were in two places where I do business discussing me and my blog post in a negative light, in public basically. Again, this is something I totally cannot control.

But I think I can understand it. Sometimes we just need to vent and it may not always be in the most appropriate place or to the most appropriate person or people and I am thinking this is what the case was. Girls like to talk things out. Guys like to act. That's just what we do. And I am certainly guilty of venting to people myself! I think we sometimes need to vent to just get over it.

Now if this is you, don't take this post as another attack because really, I am not attacking you–just trying to tell the story as it unfolded. If I have something to say to someone and I think it would help us have a better relationship, then surely I will chat with them face to face about it. If I don't think it will get us anywhere productive, then I won't talk to them about it. Why get all flustered if I don't think anything good will come of it? And again, this post is about me and my journey to find a resolution for 2009.

Like I said before, I want my blog to be a happy place for scrapping, not another Scrap Smack (if you don't know what that is, count yourself lucky).

I am addressing this here because I really don't know if anyone else was offended. And since I was informed it was people I really do not have a strong relationship with, I don't know that they would be receptive to me talking to them about it since I really do not know them. I just shared what I truly think about things in my life in that blog post. It might be because of something I experienced in Girl Scouts, something from the Army, something I am dealing with in my family, something I am struggling to deal with personally. The blog post was “101 Things About Me” – my strengths, my weaknesses, my views, my values, and fun little facts as well. It certainly doesn't do me any good to use my blog to offend people–that's not why I put so many hours into trying to make it something useful for people so they will want to come back and read it.

Over the last few years I have had alot of “growing moments” — my experiences in this business and in life in general are teaching me lessons daily. One is to put more faith in God. Another is to be more patient and understanding with people, especially since I would love it they did the same regarding me. And another one is to not believe everything you hear and to take negative opinions and comments with a grain of salt–make your own judgements based on your own personal experiences with a person, organization, or business. Don't judge someone based on what another person has said about them. Most likely they have hurt feelings and are acting out about them. It is information but don't miss out on something that could be good because you never gave it a chance. If it isn't illegal, dangerous, or immoral, then it probably is just hurt feelings or a misunderstanding. These things have been recurring themes for me in 2008.

But I don't always know the best way to deal with things and I don't always do the right thing. Nobody does. So I've been thinking alot about people I've run into, things that have happened, words that were said either to me or about me and you know what? I think that women really really really like drama. And since I chose to be in a business filled with women that focuses on products mostly for women, well, I guess I have to accept that. I don't think we seek out drama. I just think we like it, without knowing it. Otherwise, why would soap operas and Desperate Housewives and day time talk shows be so popular? Men are NOT watching that stuff.

So yeah, we love the drama. I might be asking for trouble with this post but it is a free country and we can read and write whatever we want. So I am exercising my right. Gotta love the USA!

So back to the drama: I mean, first people talk about me. Then someone overhears and they tell me. Or the person who was talked to tells me. I get upset and then say something back to the person who told me. Then who knows what they do with that little gem! So then I struggle–do I talk to the gossiper about it, see what their problem is? Do I apologize to the person just to make it all better, even if I don't know what their problem is? Do I just ignore it? Yeah, like THAT is easy. Ha! Now if that isn't drama, I don't know what is?! I guess it is just our nature. I certainly have better things to put time into, as I am sure everyone involved does. What can you do?! Well, it doesn't have to be this way.

So that is my resolution–to try to be like her. Essentially this is like being like Jesus but it is alot easier to see a real life person who lives by the word of the Bible and KNOW that it is really possible because someone right here and now is living it and doing it successfully. I can't control what other people say and do, I can only control ME.

I can't walk on eggshells when I make blog posts. It will just take too long. But I can make sure I never talk bad about anyone. I will tell stories though. And If someone wants to be offended, be my guest to call me on it and we'll figure it out. I mean, I make alot of typos too so if you see a curse word because I made a typo, don't get mad–please let me know! LOL But seriously, things can be worked out. And if not, if our relationship is not good enough to put the effort in, then why even waste effort to talk about me at all? We only have so much time here on earth, let's make the most of it.

If you aren't offended, I hope you can laugh at some of the stuff I say. Or you can laugh at all of it if you want to-hehe. Laugh at my layouts too. Have fun!! As long as you are entertained and get some enjoyment out of reading what I have to offer.

Maybe this will re-offend the people who were offended in the first place. But honestly, if people don't bring their concerns to me personally then how can I possibly address them? And this goes for dealing with anyone. Sitting somewhere 80 miles from me with hurt feelings about something I said or wrote doesn't help anyone at all. If they just talk bad about me or spread rumors, then all it does is hurt us all. It makes us look like petty high school girls and I for one do not want to look like I am in high school. Ewww acne!

I also expect that people will expect the same of me — do unto others as you would have them do unto you. It is always true. If a relationship is worth it to them to work on, then call me up and let's hash it out and get to the bottom of things. Because more often than not, everything is just a misunderstanding and easily solved once everyone gets their baggage off their chest and unwads their panties.

So I resolve to not get bogged down in the small stuff. I have the book. I have the Workbook too. Not I gotta make a layout about that!

Hmm. Maybe losing weight is going to be easier on second thought! Now, off to try clean my house. I should also resolve to do a better job on my mother-ly and wife-ly duties around the house but maybe I'll work on that one in 2010…

And now for a layout about meeting Leslie Hall. I *think* she is a performance artist but whatever she is, it was an experience meeting her! LOL 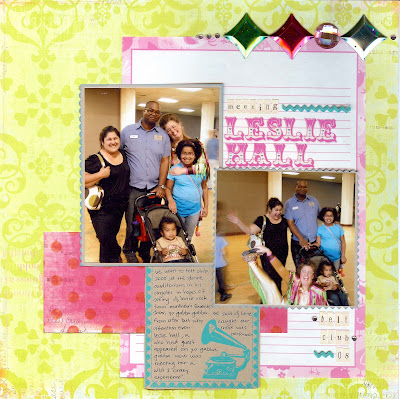 Can't always be too serious. I gotta remember this too.