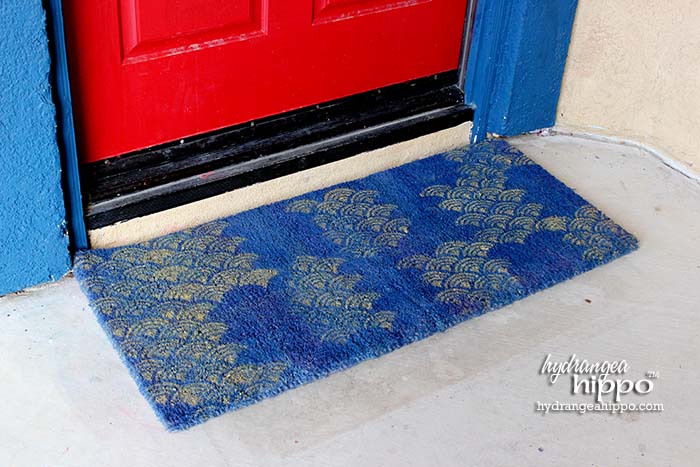 The last couple of years I have been somewhat of a miser. Penny pincher. Cheapskate. I haven't been spending much money on things for myself or the house. It's a long story about the WHYs of why that was happening but it was a change I made for the better in trying to keep my finances in order. In light of all of this misering, it was a big deal that I decided to treat myself to a new backdoor mat. We needed a new backdoor mat as the current mats were not keeping the dirt from coming inside of the house and the best mat of the 3 had been claimed by one of the dogs as a bed, dragged across the yard and never anywhere near my door.

You see, though there was a drought this year, here in the High Desert in Southern California we got a LOT of rain. This would probably be equivalent to one day of rain in Seattle or North Carolina that we got over the course of a month but still, it was alot for us. Our yard has a drainage problem so that meant that our backyard was a muddy swamp for about 90 days. A cold, muddy swamp. With clay-like dirt that sticks to your shoes and won't come off until you're INSIDE the house. You see, the dirt KNOWS that it just needs to make it inside the house and then it can release and stain my carpets and make chunks on my floors and totally gross me out when I step in it barefoot. So we really truly needed a new backdoor mat to help scrape all the crud off our shoes.

I found the perfect mat. The Cadillac of backdoor mats, it was nearly 4 feet wide and made of crusty rough sisal stuff that likes to scrape off mud. It was $24.99 at Target and that is more than I have ever spent on a back door mat. I mean, I'm going to put my feet on it, no one is going to see it, it is going to be in my backyard for Pete's sake! But I bought it. I was so happy to have this mat and when I laid it across the porch at the backdoor, it stretched the entire length of my sliding glass door like no mat before has ever done! We cleaned the floors and I enjoyed a night without little pebbles stuck to my socks or in my slippers. It was pure ecstasy.

The next day, I looked outside to see my mat ripped in half. I thought I took photos but I must have deleted them.

Obviously, some dog, that shall not be named, had a death wish. Seriously. The dog CHEWED my awesome amazing, functional and expensive backdoor mat that I didn't have for 12 hours in HALF! What is wrong with that dog?! It knew it did something wrong. I just couldn't even deal with it. People online suggested that I tape it back together or something… no. It was a lost cause. I had the kids pick up all the pieces and toss it in the trash. Stupid dog.

A few months went byand the rug in my living now had brown tracks all over it and it was disgusting. There's only so much steam cleaning you can do when there mud ground into the rug. It's not that we are pigs – it is that you can't go outside without getting mud all over and well, those pesky dogs need someone to go outside and feed them. One solution could be to get rid of the dogs but they are kinda cute:

I was in Pier1 looking for some dessert plates for a blog post I did last week and I started cruising the clearance section,. I had not been in Pier1 in MONTHS and it used to be my go-to home goods store. I saw a backdoor mat that was on clearance for $19! It was even bigger than the one the dogs ripped up. The back was woven – the previous mat was a piece of rubber with the sisal glued to it but this one, it was all woven together tightly. I figured that was step one in defending the mat from the dogs.

Step 2 was to make the mat “not ugly”. It was hideous. I mean, sure, Xaver liked the stripes but he loves stripes everything burgundy and hunter green…blech! There had to be a way to change this mat to be cute like my other mat was. Or cuter.

And then it hit me: spray paint.

Step 3 involved even more dog proofing of the mat. The side benefit of spray painting the mat was that the dogs would want nothing to do with. YES! Success!

Here's what we needed to make this mat miracle a reality:

And here's how I did it:

Put the drop cloth down to cover your work surface, aka, the driveway. Side note: move your cars so the overspray won't get on them. It's always windy here so I always have overspray.

Next, lay the mat on the drop cloth and shake those paint cans super well. It took two coats of Krylon Color Master spray paint in Oxford Blue to cover the mat. It's because the mat has ALOT of fibers and you gotta get the paint into all the crevices.

After that dries, lay the stencil onto the mat and spray with one color of spray paint. You can add newspaper or cardboard to the stencil to create a larger mask around the edges to prevent any overspray getting on the other parts of the mat. You'll want to spray each color of the stencil separately, waiting for it to dry before moving the stencil over and painting the next image. I used one color of paint with the stencil for a more uniform look, to compliment a wreath I also made for the front door.

After letting that dry, I decided the mat was too special to be in the backyard and it should go at my front door.  Mission accomplished? Thankfully the mud in the backyard has dried so I guess I'll get another backdoor mat when I need one. And if I do decide to move this one back to the backyard, it's totally dog proof now. The dogs will not want to chew it with all this paint on it. Next project – painting  their dog house!